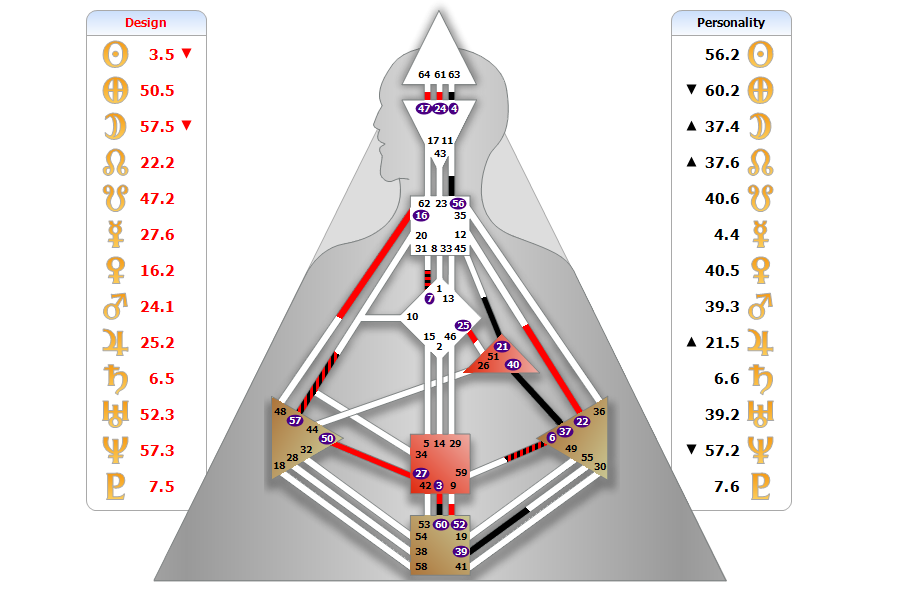 It begins with his Type and Authority—the Emotional Generator.  Generators must always respond to stimulus in their environments.  For Williams to get a “yes” on a project, or to really find his personal truth before dedicating his energy to something, he would have to check in with his emotional authority.  %50 of the world is emotionally defined, and this solar plexus center fucntions like a biorhythm, but specifically a rhythm or wave of emotions.  We always recommend emotional authority types to learn to witness their highs and lows, and honor where they are at emotionally.  But to make the big decisions in life absolutely requires time and patience, so that an emotionally neutral place can be discovered.

We can assume that Williams was in an incredibly low point in his emotional wave, when he made the decision to end his life, unable to acknowledge that he would rise out of the depths of the underworld to the heights of joy and laughter.   Williams’ ability to play many different characters with different emotional textures suggest the power of the emotional solar plexus center to transmute depressive or dark energy into something creative.

One of the most notable pieces of Robin Williams’ Human Design is his undefined Identity Center, which can be quite an asset to actors, since it facilitates a chameleon-like nature.  It especially supports the ability for actors/performers to morph into many different archetypes and roles.

Similarly, Williams has an undefined Throat center, which can be a great gift as a performer, since it allows one to slip in and out of voices and characters quite easily.  One could notice that within just a few seconds, Williams could jump from Shakespeare to an elderly grandmother to some alien creature.  This would not be so easily achieved with a defined throat.  It is wonderful for an artist to have Venus, planet of aesthetics in the throat, and Robin has his unconscious Venus there as well.

But the shadow of the Undefined Identity center can be a sense of utter insecurity—a directionless void can open up within us wherein we turn to all the relationships around us for not only a way to define ourselves but also for finding purpose and meaning.  This outside validation can be dangerous if we are not around those who love us purely and unconditionally.  Again, the planetary layer of interpretation helps us to understand Williams even more, as we see his Unconscious Jupiter in the Identity center.  Jupiter is the planet of humor and would contribute to the jovial, inspired, and over the top qualities we all witnessed in Williams.  But the only other planet co-present in the Identity center with Jupiter, is Williams’ Conscious and Unconscious Pluto, pointing to the potential for a constant death-and-rebirth theme in terms of Williams’ identity, the snake that might continually eat its own poisonous tale, before urgently needing to shed its skin, regenerate, and renew.  Jupiter amplifies the Plutonian extremes, either towards total empowerment and rapture or shadowy self-destruction.

Robin Williams is a Split Definition, which means that his Emotions and Will speak to each other, and his Root, Sacral, and Spleen centers communicate to each other, but they do not all link together.  Thus, this Split could create an inner tension between William’s need for patience to receive his emotional clarity and his splenic fear response and animal instinct, and the root pressure to get things done.  This could feel like battling voices going off inside of him.

The 37-40 Channel of Community gives Williams his emotional authority.  This tribal circuit suggests that William’s moods would be very dependent on those around him, including those in his tribe, and his family members.

Williams has another tribal channel, the 27-50 Channel of Preservation.  People with this channel offer great support for those around them, including acting as a conscience for the community.  Much of Williams’ comedy directly demonstrated those values which were, or were not, nourishing for the whole.

The last definition and probably most challenging for Williams is the 3-60 from the Root to the Sacral centers.   Called the Channel of Mutations, this energy pathway applies a constant adrenalized Root pressure to innovate, renew, and regenerate self and others.  This kind of pulsing frequency can be erratic and inconsistent, so that the moments of stillness can actually create an inner tension, resulting in melancholia, depression, and anxious moods.

The Human Design Profile reflects much of our personality, motivations, filters of perception, and approach to life and relationships.  Of the 12 Profiles, Robin was a 2-5., which traditional Human Design would label the Hermit-Marytr. On the conscious level, the second line theme suggests the natural gifts and talents that Williams had, as well as the second line personality tendency to vacillate between shyness and bold expression.  The second line person often prefers to be alone, but even though the 2-5 has a hermit component, it will constant be called out on a mission by those around it.  The 5th line Unconscious theme will consistently deal with the fields of projection.   The fifth line has great gifts of leadership, but often must battle the angels and demons of other people’s stories about who they are or what they should be, whether a savior or a martyr.

High profile Hollywood actors must deal with pressure from agents, fans, family, and their own inner critic.  Reputation is always a motivating factor for 5th line beings.  This might have become too much of a game for Williams, who wit the second line personality, may have actually preferred to curl up in a ball and shut off the world.  There is an interesting quote from Robin Williams that reflects this idea:ly “I used to think the worst thing in life is to end up all alone. It’s not. The worst thing in life is to end up with people who make you feel all alone.”

Robin Williams—your artist, your comedic genius will never leave this world feeling alone.  We thank you for all you shared with this planet, and the great work you do for us now, teaching through your transition to the worlds beyond.