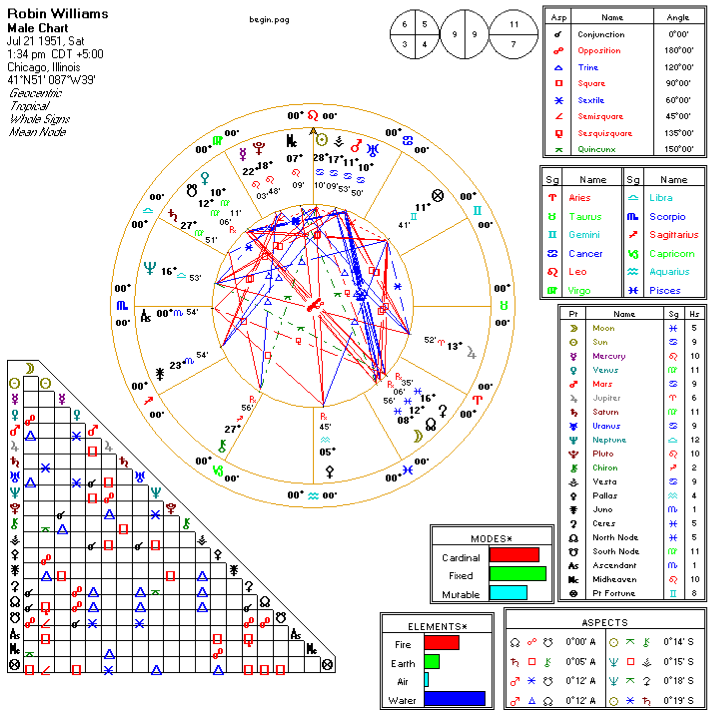 We have all been touched by the recent loss of one of the great comedians and talented actors of our age, Robin Williams.  I want to share a few key elements in Williams’ birth chart to reflect some of his comedic genius and his struggles with alcoholism and depression, as well as some powerful transits that may have triggered his tragic death.

In Dead Poets Society, a film I watched over and over again for its sheer poignancy and power, this dialogue unfolds between prep school teacher McAllister and teacher Keating, played by Williams.

McAllister: “Show me the heart unfettered by foolish dreams and I’ll show you a happy man.”

John Keating: “But only in their dreams can men be truly free. ‘Twas always thus, and always thus will be.”

Robin Williams was a man who loved to live in his dreams, whose genius frolicked in the eternal playground of the imagination.  One of the things which challenges us most about his suicide is that in one of his most famous films What Dreams May Come, Williams’ character deals with the consequence to the soul of committing suicide as he visits the land of the deceased and specifically his wife, stuck in the purgatorial realm of those who take their own lives.

The tragic reminder of life imitating art sadly emphasizes Williams’ plight so acutely described in his birth chart.  Robin Williams was born July 21, 1951 at 1:34 pm in Chicago, Il.  The first thing we notice in Williams’ chart is that the big three—Sun, Moon, and Rising are all in the Water element, in addition to his Mars/Uranus conjunction in Cancer, and his North Node/Ceres/Moon conjunction in Pisces.  The water element in such propensity in the chart gives a highly sensitive and empathic being very tuned in to the realms of the imagination.

Cancer Suns and Mars are often devoted to their families, while Pisces Moons have a gift for channeling creative energy.  Often naturally psychic, highly intuitive, and dreamy, Moon in Pisces fundamental need is to dissolve boundaries.  This is what gave Williams such a talent for being a chameleon, playing many different types of roles in his art, and slipping into various characters easily from one moment to the next in his stand up routines.  Yet, this Moon sign’s concern for dissolving boundaries, if not deeply connected to its spirituality and Source, can often be attracted to escape through altered states of consciousness such as alcoholism, leading to vicious cycles of addiction and depression.

One of the strongest transits that Williams was receiving upon his death was Neptune conjunct his Moon.  Although this could be one of the greatest spiritual transits of our lives, for an uncentered being, this transit could make us feel as if we are flailing in the middle of the ocean, dissolving away with no anchor to ground us.  Neptune can bring the most profound states of meditation and unitive consciousness, or make us yearn so deeply for heaven’s promise that embodiment is a burden we no longer wish to bear.

Neptune transits to such a watery person as Williams could have felt like a storm looming on the horizon, a storm of madness, with the potential to completely lose both his body and his mind (Parkinson’s Disease) and enter an ocean of depression beyond the point of salvation.

With his North Node in Pisces, Williams’ soul’s destiny was to enter these rapturous and ecstatic states of oneness, through art and spirituality.  But in order to do this, he would have to rise above his South Node in Virgo’s tendency to remain in “lack consciousness,” acutely aware always of what was not working and what needed to be improved upon.  With Saturn and Venus in Virgo as well, the self critical voices of “not being good enough”—likely very old etchings in the soul—could have been indomitable weights, yet these same archetypal configurations gave Williams an exquisite ability to cultivate his craft and commit to excellence in his work.

Many of us have been following the Uranus-Pluto square of the last four years.  Williams was someone directly affected by this square and in fact, April’s eclipses and Cardinal Cross of which I and many other astrologers spoke much about, may have been the ultimate test for William’s faith.  The Lunar Eclipse  and Cardinal Cross triggered Williams’ identity-defining configuration—his Cardinal T-Square with Neptune in Libra in the 12th house opposing Jupiter in Aries in the 6th house and both in close square to a Mars/Uranus conjunction in Cancer in the 9th house.

The effects of eclipses can last up to six months and sometimes even longer in our lives, so the Lunar Eclipse landing on a Neptune in the 12th house could bring a sense of total spiritual disillusionment, a feeling of overwhelming existential tragedy with no direction to run, which reached a peak moment this August through other planetary triggers.

Robin William’s Jupiter-Neptune opposition propelled his over-the-top comedy and love of acting, Shakespeare, story, and also according to wikipedia, video games, for fantasy drives Neptunian and Piscean types.  It may be especially hard for those with Neptune configured to their ruling planet to feel content living in the 3d world.  As a Scorpio rising, Mars is William’s ruling planet, the captain of the ship of life guiding the journey’s direction. In this case, the Mars/Uranus conjunction square to Jupiter and Neptune would create a consistent sense of violent urgency to expand, dissolve, or escape into altered states.

With the two planetary symbols of death, Saturn and Pluto squaring off in his chart this summer, Williams was primed for a shamanic experience of psychological death and regeneration, but his caterpillar could not see the butterfly on the other side of an apparently suffocating cocoon. 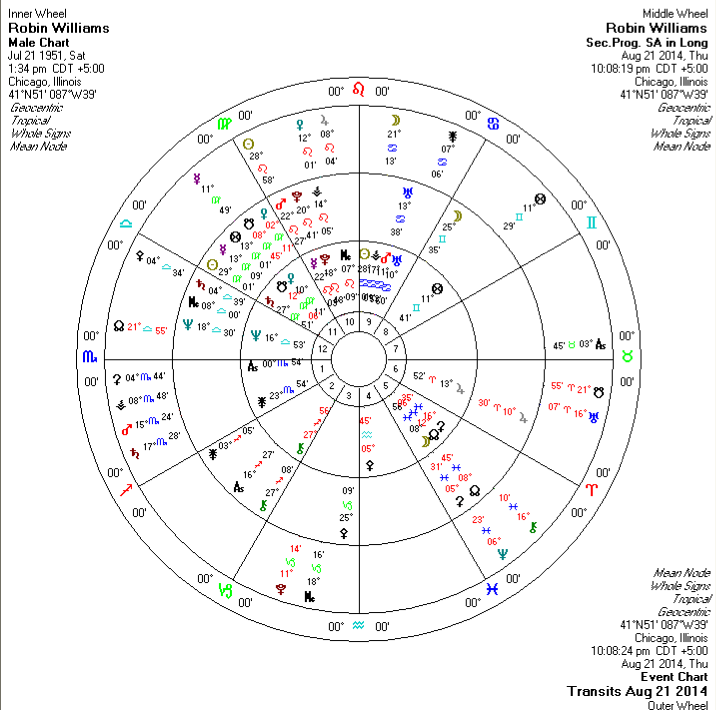 Recently I have been adding in many more techniques from Traditional Hellenistic Astrology, one of these being a simple, but profound technique called Annual Profections, which determines a focal house and planetary lord of the year determined by our age.  Williams was in a sixth house profected year, which alone would suggest that health would be a major theme in the coming year.

With Profections, we look at the most significant transits of the year occurring with the “Lord of the Year,” which would be Mars, ruling the 6th house Aries.  We also must study transits involving the planet Jupiter, which tenants Williams’ 6th house.

Both transits to and from Mars and Jupiter would promise the most important events in Williams’ life this year.

Significantly, since Mars not only rules the sixth house but is also the ruler of the chart, anything that happens in a year when Mars is the Lord, will affect the course of William’s life.

The first transit that jumps out is Pluto exactly opposing his Mars (and Uranus just one degree away.)  This transit symbolizes the unexpected, shocking death and the hidden motivations behind it.

As the Lord of the Year, Mars is traditionally considered a malefic planet, causing problems in our life.  Also, if we just look at the condition of Mars itself we notice that Mars is in a weakened state in its fall in the sign of Cancer.  Mars is also contrary to the sect, since this is a day chart.  This makes Mars William’s most challenging planet, and years when Mars is the Lord could be the most difficult and harrowing years.

Mars had crossed Williams’ Ascendant just a week prior to his death. This places the aggressive and confrontational force of Mars right on the angle of personal identification, giving the force of violence a self-directed thrust.

It intrigues us to note that transiting Mars was applying to the Ascendant when the famous and brilliant author, Ernest Hemingway shot himself.  Perhaps Robin Williams could have supplanted Hemingway’s experience of this transit with Martin Luther King Jr., who used this same applying transit of Mars for his moment of most catalyzing leadership—the March on Washington D.C.

In addition to the Mars transits, the transits to and from Jupiter played a significant triggering role in William’s death.  Uranus had been hovering around the degree of his Jupiter all year of 2014, with Pluto squaring that Jupiter.  These transits could definitely test one’s faith, question one’s philosophy, theology, and sense of life’s ultimate meaning.

Sadly, Jupiter had just entered Williams’ 10th house of career, in fact just crossing the midheaven angle. This could be one of the most prolific and positive cycles for our vocational calling to reach the public.  In actuality, this Jupiter transit has factored in to the high publicity of William’s death, with many tributes to William’s Jupiterian nature—the joyful and playful laughter he brought into our lives.  But Williams’ death has also brought us to Jupiterian teaching about the conditions of depression, insecure mental health, and Parkinson’s disease.

One wonders what kind of positive, uplifting, and inspiring potentials may have occurred if Williams’ had experienced Jupiter cross over his Venus/South Node and Saturn in 2015 and 2016.

Two other transits of importance in Robin William’s transition chart include the wounder/healer centaur Chiron.    His Progressed Moon was in the 8th house of psychological depth and mortality, opposite his natal Chiron.  Thus, his emotional world may have felt lost in primal wounds, stories of victimization or unconquerable sufferings.  Chiron was also exactly transiting natal Ceres, the dwarf planet symbolizing sense of belonging, self-esteem, and the regenerative power of loss and return familiar to all parents.  The daughter of Ceres/Demeter was Persephone who was abducted to Hades/Pluto’s underworld.

When we consider Chiron’s role in our lives we can think of the childhood wounds which could not be transmuted in the life of Michael Jackson, who died at his Chiron Return, but we can also reflect upon Eckhart Tolle, whose The Power of Now appeared also at his Chiron return, and made Tolle an instant Chrion figure—a mentor, a guide, and spiritual coach for others.  In a way, Chiron crossing Robin William’s North Node in Pisces has also made his death and his depression a healing teaching for all of us.

In talking to a healer friend of mine, I faced a deep metaphysical question that only someone like Robin Williams could really conjure in my soul.  The question remains: is suicide part of the soul’s contract—to itself, to its guides, to other souls it has known for lifetimes OR is suicide the ego’s attempt to become God and always a way out of fulfilling our soul-contracts?  Thus, as some religions and spiritual teachings say, if we commit suicide, are we just going to have to come back again to work out the same karma and pattern in the soul?  It is these difficult questions that Robin Williams has raised for us in his tragic, final act.  We will explore Williams’ Human Design chart in our next newsletter to gain further insights into this extraordinary, but troubled artist.

Thank you Robin Williams, for your medicine—the laughter, the depth, the sadness, for shouting out your unique voice at the top of your lungs, and inspiring us to do the same.

John Keating: Boys, you must strive to find your own voice. Because the longer you wait to begin, the less likely you are to find it at all. Thoreau said, “Most men lead lives of quiet desperation.” Don’t be resigned to that. Break out!